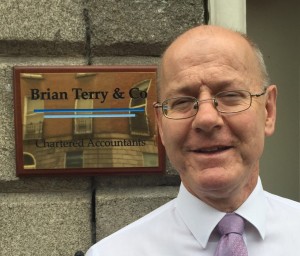 Brian Terry is a  Fellow of the Institute of Chartered Accountants in Ireland and a Chartered Tax Adviser with the Irish Taxation Institute with over thirty years experience. With this wealth of experience we deliver a range of value added accountancy, tax and advisory services.

We pride ourselves in being approachable, personable, enthusiastic, professional, value for money and above all, effective. In the current financial climate conditions are tough, so if you struggle to get a response from your current accountancy firm, come and have a chat with us.  We have developed a reputation for providing a quality service for our clients for over fifteen years. Our experienced professional staff supply a full range of accounting services tailored to our clients’ requirements. We offer a free initial consultation to all prospective new clients.

Capital gains tax Farm restructuring relief is extended to the end of 2022, with no change being made to the conditions for the relief. The decision to extend the relief follows on from a review of the relief earlier this year but is subject to EU State Aid approval.

International tax update The Minister referred to Ireland’s Corporation Tax Road Map, published in September 2018, which sets out progress on corporate tax reform and the next steps required to implement the EU Anti-Tax Avoidance Directive and the recommendations of the 2017 Coffey Review on Corporation Tax. Two measures referred to in the Road Map were announced by the Minister. Finance Bill 2019 will provide for the introduction of anti-hybrid rules which will be effective from January 2020. These rules are an anti-abuse measure designed to prevent arrangements that exploit differences in the tax treatment of an instrument or entity under the tax laws of two or more jurisdictions to generate a tax advantage. Ireland’s transfer pricing rules will be amended to transcribe the OECD 2017 Transfer Pricing Guidelines into Irish legislation. The rules will also be extended to cover cross-border non-trading and material capital transactions, and to extend the application of transfer pricing rules to SMEs, subject to a Ministerial Commencement Order. The detail of these amendments will be included in Finance Bill 2019. With effect from 9 October 2019, a technical amendment to the exit tax provisions will take effect. Employee taxation

Employment Investment and Incentive Scheme The Department of Finance carried out a review of the Employment and Investment Incentive scheme (EIIS) earlier in the year. The main changes announced are aimed at enhancing the scheme and improving its operation, and are as follows:

Special Assignee Relief Programme (SARP)  and Foreign Earnings Deduction (FED) Both the SARP and the FED are to be extended by three years until 2022.  The SARP is an income tax relief measure for foreign executives who come to work in Ireland.  The FED is an income tax relief for Irish employees who go to work abroad in certain qualifying countries.

Excise The excise duty on a packet of 20 cigarettes is being increased by 50 cents with a pro-rata increase on other tobacco products. This will bring the price of 20 cigarettes in the most popular price category to €13.50. Vehicle Registration Tax (VRT) There will be a change in the way vehicle emissions are taxed going forward:

This leaflet is only a summary of the Budget Speech and is not intended to be a comprehensive guide. 8 October 2019.

Living City Initiative This initiative in its present form will be extended until 31 December 2022.

With the prospect of a no-deal Brexit looming large, the Minister has announced a contingency package of €1.2 billion (excluding EU funding) to respond to the challenges Brexit presents. The Minister has also explicitly pointed out that if a no-deal Brexit does not occur, no additional funding will be secured. The total no-deal package supports the agriculture, tourism and enterprise sectors, with €500 million set aside from the ‘Rainy-Day fund’.  €110 million will be deployed to support businesses of all sizes with a particular focus on food, manufacturing and internationally traded services. Supports will be in the form of a variety of grants, loans and equity investments.  An additional €110 million will be provided through the Department of Agriculture. The beef sector has been highlighted as the priority, followed by the fishing industry.  €40 million of funding will be provided for the tourism sector to help mitigate the impact of a no-deal Brexit in the border counties, and for targeting key markets such as the UK, North America and continental Europe.  Other allocations will be determined closer to the time.  There will also be another €365 million provided for social protection expenditure, and €45 million provided to assist

• No change to the 20% and 40% income tax rates.
• The standard rate band has been increased by €750 for a single person and €1,500 for a married
couple/civil partnership with two incomes.
• The home-carer credit and earned income credit have been increased by €300 and €200
respectively.

Stamp duty
Young Trained Farmer Relief, which exempts the transfer of agricultural land to a ‘young trained farmer’,
has been extended for a further three years to 31 December 2021.
Income averaging
The restriction that operated to disallow income averaging relief for farmers with off-farm income has
been removed.
Stock relief
The three separate measures of stock relief for income tax have all been extended for an additional three
years to 31 December 2021.

• No change to CGT and CAT rates.
• The Group A CAT threshold, which typically applies to gifts and inheritances from parents to
children, has been increased by €10,000 to €320,000, with effect from 10 October 2018.
• No change to stamp duty rates.

The Minister reaffirmed the Government’s commitment to the 12.5% corporation tax rate.

Corporation tax exemption for start-ups Corporation tax relief for certain start-up companies has been extended for a further three years to 31 December 2021.

Ireland’s Corporation Tax Road Map, published in September 2018, sets out progress on corporate
tax reform and the next steps required to implement the EU Anti-Tax Avoidance Directive and the
recommendations of the 2017 Coffey Review on Corporation Tax. The Minister announced the
commencement of two measures referred to in the Road Map:
• Finance Bill 2018 will provide for the introduction of new Controlled Foreign Company (CFC)
rules, which will be effective for accounting periods beginning on or after 1 January 2019.
These rules will be designed to prevent the diversion of profits to CFCs in low- or no-tax
jurisdictions.
• With effect from midnight on 9 October 2018, a new exit tax of 12.5% has been introduced to tax
unrealised capital gains where a company migrates or transfers assets offshore, such that they leave
the scope of Irish taxation.
There will be a review and update of Ireland’s transfer pricing regime in 2019.

• The Department of Finance and Central Bank of Ireland will review crowdfunding and introduce
new regulations.
• As part of this review, there will be an assessment of withholding tax rules in respect of peer-to-  peer
lending.
Capital allowances
• A new scheme of accelerated capital allowances for acquisition of gas-propelled vehicles and
refuelling equipment is to be introduced; details are expected in Finance Bill 2018.
• Legislation providing for accelerated capital allowances for employer-provided fitness and
childcare facilities was included in Finance Act 2017 and will commence from January 2019. It was
announced that amendments will be made to the legislation but no details are yet available.

Employment Investment and Incentive Scheme (EIIS)
Following on from a recent review of this incentive, the Minister announced that he:
“…intend[s] to bring forward a priority package of measures in the Finance Bill to address the
main problems identified and to increase its efficiency and effectiveness.”
Film relief
• The corporation tax credit available in relation to film production has been extended for a further
four years to 2024.
• A new tapered regional uplift to the credit, commencing at 5%, has been announced and this will be
subject to EU State aid approval.
Key Employment Engagement Programme (KEEP)
The Budget provides for increases in scheme limits in respect of the market value of share options that
can be granted to a key employee/director. The market value of share options cannot exceed:
1. €100,000 in any one tax year (no change);
2. €300,000 over a lifetime (increased from €250,000 over a three-year consecutive period); or
3. 100% of the salary of the employee/director in the year of grant (increased from 50%).
PROPERTY
Rental income
The tax deduction available in respect of interest on loans used to purchase or repair rented residential
property will increase to 100% from 1 January 2019.
Local Property Tax (LPT)
A review of LPT is ongoing and will be complemented by a consultation process. In his Budget speech,
the Minister restated his commitment that:
“… any future changes will be moderate and affordable.”

INDIRECT TAXES
Excise
• Excise duty on a packet of 20 cigarettes is being increased by 50c with effect from midnight on 9
October 2018. There will be a pro-rata increase on other tobacco products.
• There are no changes to the duty on alcohol, petrol or diesel.
Betting tax
From 1 January 2019, there will be an increase of 1% (to a rate of 2%) on bets placed in the State with
bookmakers, as well as an increase to 25% (from 15%) on commission earned by betting intermediaries.

• The VAT rate applicable to the tourism and hospitality sectors reverts to the 13.5% VAT rate, with
effect from 1 January 2019.
• Printed newspapers and access to sporting facilities will continue to be subject to the 9% VAT rate.
• The rate applicable to electronic publications will reduce to 9% from January 2019.
Vehicle Registration Tax (VRT)
• The VRT relief available for conventional hybrids and plug-in electric hybrid vehicles is extended
for a period of one year, until the end of 2019.
• A 1% VRT surcharge will apply to all diesel passenger vehicles registered from 1 January 2019.
Carbon tax
• No changes were made to the rates of carbon tax.
• The Minister announced that he intends to introduce a long-term plan for increasing carbon taxes
over the period to 2030.
PREPARING FOR BREXIT
While no specific tax measures relating to Brexit were introduced, the various tax reliefs available for
SME businesses and the agriculture/food sector are a general support to those exposed sectors. As in his
2017 Budget speech, the Minister’s main focus was on the allocation of additional funds to support
Brexit readiness.
Human Capital Initiative
A fund of €300 million is being made available throughout the period 2020 to 2024 to increase
investment in higher education courses across the country.
Future Growth Loan Scheme
Following on from the €300 million Brexit Loan Scheme made available to SMEs last year, a further
€300 million will be made available to lend at a competitive rate to SMEs and the agriculture/
food sector.
Funding for Brexit measures across government departments
€110 million is to be made available for Brexit measures across a number of departments, including
funding for customs requirements and other targeted measures.
Increased funding for farm and food sectors
€60 million of funding is being made available to improve resilience in the farm sector and productivity
in the food sector, and to provide additional resources in relation to the regulatory requirements
of Brexit.
Increased funding for the PEACE Programme
The aim of this funding is to support economic and social stability in the border region during the
Brexit period.